With Soothing Mushroom Extracts For All Skin Types Including Sensitive, Visibly Irritated

A soothing, no-rinse cleanser that removes makeup and sweeps away impurities in one step. This multitasking toner and cleansing water contains powerful cleansing micelles (small round structures) that act like a magnet to trap surface impurities and pollutants, gently lifting them away without irritating skin. Gentle enough even for sensitive skin types, this soothing formula cleans and revives tired complexion while keeping the skin feeling clean, calm, and hydrated.
Our Soothing Mushroom Extract is a patent pending bio-activated aqueous extract of Cordyceps Sinensis and Trametes Versicolor. Trametes Versicolor, also known as “Yun Zhi”; a mushroom widely used in Japan and in Traditional Chinese Medicine. Cordyceps, also known as “Dong Chong Xia Cao Tochukas”, is considered a general health tonic in China and promotes health through its immune-modulating and energizing effects.

There are no reviews yet.

Be the first to review “Micellar Cleansing Water” Cancel reply

JOIN OUR EMAIL LIST TO GET 10% OFF YOUR FIRST ORDER AND EXCLUSIVE ACCESS TO PRODUCT UPDATES, SALES, AND MORE.

Thanks for subscribing! Please check your email for further instructions.

Something went wrong. Please check your entries and try again. 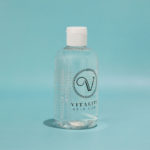